by documenta fifteen
student-forum is a project of ruruHaus activation
eng
15. August 2022 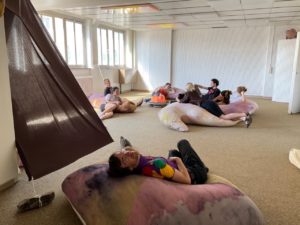 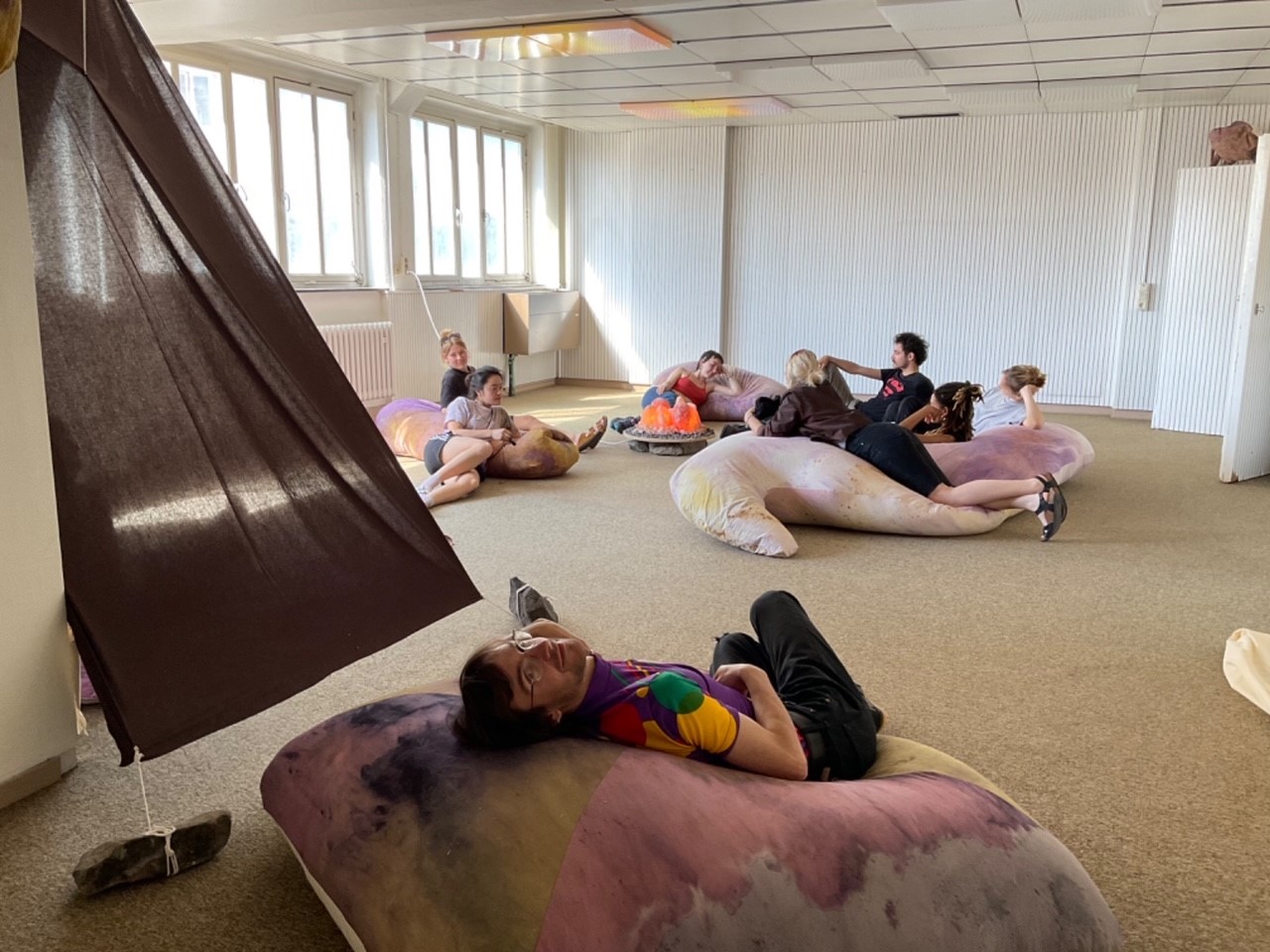 Designed and created by: Anna Stapelfeldt, Benjamin Bakhshi, Peng Zchei, Luna Becker, Cathrin Rebecca Zumhasch, Amira Mostafa, Eythar Gubara, Kaddy Saho, Elena Böttrich, Jacopo Asam and Prof. Valentina Karga (Hochschule für bildende Künste Hamburg-HfBK) documenta fifteen coordination: Jelena Toopeekoff Venue: Hafenstraße 76, 34125 Kassel The physical room of the student-forum serves as an infrastructure that facilitates support to the different student groups that visit documenta fifteen. Our concept for the design of the room is based on the idea of bringing indoors 'the outside', both in terms of the outdoors, nature, and the social or political 'elsewhere'. To build it, we used cotton, natural dyes and locally-sourced wood, all compostable since composting is an essential practice of lumbung. The room is organised in four main areas: Gather: The seating area around the "campfire" invites to rest, communicate, debate, brief, and generally come together as a group. Claim: The tent refers to camping in nature, but also to protest camp tents (student forum Indonesia, Sudanese revolution, occupy movement)and represents (re)claiming space. Harvest: The canvas wall, painted and embroidered symbolically with mushroom-like growing organisms, is the place for students to harvest (write down) their thoughts after a day of input. Film: The film is about the first documenta fifteen student-forum visit made by the Seminar of Prof. Dr Anja Steidinger of the art education department - HfBK Hamburg.
published on
15. August 2022
by documenta fifteen
author:
Prof. Valentina Karga
rights of use:
Dieser Inhalt ist ausschließlich im Zusammenhang mit dem Onlineauftritt des ruruHaus zur Nutzung freigegeben.

The content can be released for use under the Creative Commons licence "CC BY-SA". This means that anyone may use the content for their own purposes, provided that the author is named in the reuse ("BY") and that any modified versions of the content are released again under the same CC conditions ("SA"). Releasing content under Creative Commons promotes a culture of sharing and free exchange and can lead to new ways of dealing with creative property in the context of ruruHaus.

Alt texts describe an image so that a screen reader or other assistive technology can interpret the image for people with limitations.