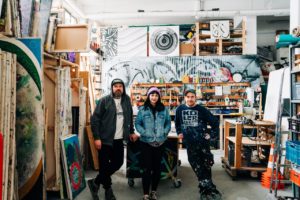 KolorCubes is an art project and network for culture in public space. With large-format wall designs and their art mediation, KolorCubes also operates the Public Art Gallery as a non-profit association in person, digitally and analogue.

Around the workspace, the open studio in a former industrial hall on the KreativFabrik site in the Schillerviertel, concepts are developed and implemented for the producer gallery and for suitable events. Actions and works are created in collaboration with regional, national and international artists. Together with cities and municipalities as well as offices and institutions, KolorCubes develop sustainable projects for the respective context in the sense of an enlightened inter- and art-cultural community