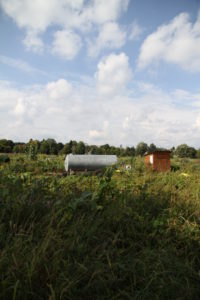 MAP was founded in 2002 as an independent, artist-generated work and project platform for the development and realisation of consistently context-specific, interdisciplinary projects in public urban and social spaces. Projects are conceived and implemented in collaboration with local actors and initiatives, artists, and other active members of urban society as a means of exploring the complex interactions between local communities, cultural practices, and political spaces.

Specific urban situations, social spaces, or landscape sequences such as the precarious trade and traffic route along the A40 autobahn; the heterogeneous surroundings of a railway station neighbourhood; or the social space of cultural production become the context and background for work that develops in temporary, interdisciplinary project communities and cooperatives. It is in the interaction between art and urban space – between everyday cultural protagonists, cultural producers, and urban society as a whole – that exhibition projects in public space demonstrate new horizons of local knowledge in a global context.