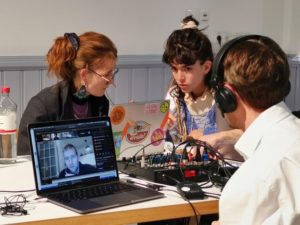 Initiated in February 2020, Station of Commons investigates the possibilities of reappropriating technology within public space. The point of departure of the research questions both centralized knowledge and data centers operated by major organizations and its underlying social implications. What are the interdependences between the users, the providers, the services, the technology and related knowledge at work? And how to rethink another model of shared empowerment situated in time and space unique to its agent, or communities? The Helsinki and Geneva based initiative consists of Grégoire Rousseau, Minerva Juolahti, Alain Ryckelynck, Constantinos Miltiadis, and Juan Gomez.

Station of Commons is the coordinator of the online community radio project lumbung radio that is part of documenta fifteen. The radio starts already slowly in April and is broadcasting 24/7 during the 100 days of documenta fifteen, and hopefully also afterwards, from and to the whole planet. It’s the result of the radio working group (consisting of the initial members Grégoire Rousseau, Malene Saalmann, Gözde Filinta, Ayşe Güleç, and Reza Afisina) that started meeting in August 2021 between Kassel, Jakarta, and Helsinki, with the aim of envisioning a collective audio practice based on principles of commoning as a shared space between inter-local nodes of the documenta fifteen ecosystem.

lumbung radio is an open online broadcast that comprises of an inter-local network of distinct radios and audio practices. It operates in no specific time zones, and streams multiple languages, music, and art. Each participating radio station depends on its own means of production, way of thinking, learning, and sharing. lumbung radio operates as a decentralized network of nodes that uses internet without its hegemonic agency. The intention is producing an audiophonic common space built on the multiplication of the existing practices of its contributors.

lumbung radio runs on open-source infrastructure and is self-hosted on a dedicated server. The program comprises of relays and original contributions by its nodes, assembled via timesharing. The streaming will be available via the ruruHaus website and lumbung.space.

beteiligt an:
Station of Commons
lumbung radio
Webseite: Station of Commons
Webseite: lumbung radio
E-Mail: Contact
This is a historical website. The imprint available here was valid on the date of the website’s publication and is only kept in the original for archival purposes. Here you can get the imprint currently valid for this site and further information.
Accept